I woke up feeling like a new woman. Pretty soon, I  would be a new and improved Jen! Due to some recent events, along with the fact that a shift is taking place in my life, I figured what better way to start anew than on Easter Sunday. The very day that Jesus rose from the grave. If I played this right, Jesus and I could have something in common. Not being dead, I will just skip that part, but when Jesus rose from the dead, one could say a big ol shift was about to take place, and me, rising from the ashes, rising from feeling broken and sometimes lost, I will rise again as well. Like today, on Easter Sunday.

It would be a productive day. We would celebrate, ( celebrate Jesus, not me) we would enjoy our Easter dinner while reflecting on the past and looking forward to what the future may bring. Yes, it would be a good day.

Joe left for work at about 4am. I figured even the new and improved Jen could use a few more hours of sleep. With “Sister Wives” playing on Hulu, I closed my eyes for just a moment.

Seven hours later I woke up. I am not even sure how that happened. It’s like I went to bed twice. Last night around 11pm, then again this morning at around 4:30. Well, the new and improved Jen was not going to let that stop her! I mean yeah, I was now a good three hours behind on everything that needed to be ready by the time Joe got home in an hour, but, I am good!! I can do this.

With “Sister Wives” still on Hulu (because what says Happy Easter better than polygamy?!) I threw a load of laundry in the wash, the potatoes in the oven and prepped the ham. I was rushing, but everything was on track. Also, it’s not like Joe would come home from work and be upset if dinner was not on the table. He is not like that. Joe is probably just happy to come home and see that the fire department has not yet been called.

The only thing I needed to get started on right now was the glaze for the ham. Now, a glaze packet came with the spiral ham, but I hate those packets. The glaze is always too sweet for my taste. I decided to try my hand at my own ham glaze. From the little bit I had read online, it was just basic ingredients. Pineapple juice (I just reserved the juice from the pineapples I put on the ham) and brown sugar. Two ingredients. It really cannot get much easier.

I decided I would “wing” the measurements. Pineapple juice and brown sugar. I think I am good, right? Liquid to solid ration, with me wanting more solid? Whatever, I will figure it out. I poured the pineapple juice into the saucepan, I then added some brown sugar and cloves. I just figured cloves would add an extra “somethin somethin” to the glaze. I turned the heat on medium high, started whisking. As soon as there were the beginnings of a boil, I took the whisk out, laid it on the counter and let the glaze simmer for a few. At this point,  I am feeling good.

While the glaze is simmering, I switch the laundry, turn off “Sister Wives” and play some music, specifically Christian music, because it is Easter and Jesus rose from the dead and I am rising from my ashes.

Now, here is where things get a bit tricky. I go back to check on the glaze. Everything looks good. It is turning into a nice thick, well, glaze. I pick up the whisk that I had previously left on the counter and give the glaze a quick whisk. It is then that I notice something odd. There is a bit more liquid on the counter than I remember. I mean hell, there was no liquid on the counter, so I was more than confused.

Hmmm. This is weird. Now, I still had a can of about 5 large pineapple slices in it, but no liquid. Remember, I used that for the damn glaze. Was there a chance that there was juice still left in the can, and the can somehow knocked over, and someone picked the can up but did not wipe up the juice?

I am still whisking the glaze. I think anytime now I will be able to pour it on the ham, but the liquid on the counter has me stumped. I grab a towel and wipe it up. I notice an odor. A very odd odor. Dear God, what is happening? I take the towel, slowly bringing it closer to my face and smell it. Quickly, I throw the towel down on the floor while stomping on it. I have no idea why I felt the need to stomp on it, other than I have a tendency to be dramatic at times.

How would this even be possible? Cat pee. A very faint scent of what I think may be cat pee. I look around, making sure none of the kids see this. Especially Vinnie. I then look at my beloved glaze, simmering in the saucepan with the very whisk that was laying in cat pee.

Now, believe it or not, my cats are pretty well behaved. No jumping on the counters, no one is allowed to feed them table scraps. However, I have one cat that likes to push my buttons. He pretends he is dumb. During the days he is just a big ole twenty-pound blob laying on the sofa, only waking to eat and use the litter box. When everyone goes to sleep, the little bastard sneaks into the kitchen and looks for leftover human food. He thinks I am not on to him, but I am. One time, he even opened the damn microwave and took out the chicken. I have no concrete proof it was him, but let’s just say if I was on Judge Judy, she would rule in my favor. Process of elimination and all that. I figured the little bastard was interested in my glaze, he went to check it out while I was switching the laundry. As soon as he heard me come back, he panicked in the form of peeing on my counter and the whisk.

I was ready to panic. The truth is, the cat pee odor was such a faint smell, I was not completely certain. I mean I could pin it on him if need be, but you know. Cat pee has such a distinct odor, maybe it was not the little Bastard, but what else could it be?

Just then, my phone rang. Great, who the hell is calling me now? I go to my find phone and see Christin’s name. Perfect! I answer the phone.

“Well, ummm, there may be a problem.”

I can hear Christin wanting to laugh, but she is holding back.

“Did you burn your ham?”

“No, I did not even get to that part yet! I think my cat peed on the whisk thing, the whisk that is now in my ham glaze.”

Oh my God is she ever going to stop laughing?

I then told Christin the same events you just read.

“I mean I do not know, it is a very faint smell, it could be the bottle of spic and span I have on the counter too. I do not know what to do. I mean the glaze smells okay but the whisk does not.”

Christin and I ponder this series of unfortunate events.

“WHAT DO I DO??? I used all the pineapple juice for the glaze!”

“Okay, calm down. I have an idea. What if you have Vinnie taste the glaze and see if he notices anything,  umm, anything unusual about it?”

Christin is still laughing, I am bleaching down my entire kitchen, making sure no bleach comes close to the oven where I have the godforsaken ham cooking.

“Okay, wait, Jen, Jason just got home. I will ask him how to make a new batch of glaze. Just toss the cat pee infested glaze and we will start from scratch.”

“Hurry!! I am running out of time and I only have brown sugar and maybe honey but I use the honey on my face so I have no idea if it will work for the glaze.”

Christin tells me to hold on. I can still hear her.

“Hey Babe, Jen messed up her glaze, the cat peed in it….”

“NO…the cat did not pee IN the glaze, he may have peed next to it, on the whisk!”

Who am I kidding at this point? In the glaze, on the whisk, all the same, freaking thing!

I hear Jason ask Christin if I have rootbeer. I do not.

“No Babe, no rootbeer, just brown sugar, and some honey she uses as moisturizer.”

I can almost see Jason rolling his eyes.

I am frantically bleaching while pouring a shot of whiskey. I cannot serve this to my family. But, I need a glaze for the ham that is most likely drying out as we speak.

“Babe! Just tell us how to make a ham glaze without rootbeer!”

Now, I like to think Christin and I are pretty smart. We are cute, somewhat intelligent girls who just happen to suck at cooking. Between the two of us, we would be lucky to pull off a grilled cheese sandwich.

Jason gives Christin a quick lesson in “Cooking 101 for Idiots.” She then relays the message to me.

I set the cat pee batch of glaze on the side of the sink. I figure it is too hot to pour down the drain. Quickly, I get started on my new and improved batch. Except, instead of the water that Jason recommended, I used some stale ginger ale I had leftover from last night’s whiskey.

Still, on the phone with Christin, who for what is worth is getting ready to go eat sushi for Easter, I feel good about my new batch of glaze. Also, who eats sushi for Easter? Well, apparently Christin and my sister do.

Christin and I hang up, with plans to talk later. My new glaze looks pretty good. I throw it on the ham and now just wait.

Joe makes it home and informs me his parents are coming over.

Back to bleaching the kitchen.

Joe and I are waiting. His parents should be here anytime now. I mean it would have been nice if I had some sort of notice (Joe!) but whatever. The new and improved Jen will adapt.

I take the ham out of the oven, while I run and try to make myself look presentable.

“Gracie, you eating? Need anything, let me get you a drink? Sofia, you need anything, how about some ranch for the salad, stay right there I will get it!”

The room is looking at me like I lost my ever loving mind. Most likely because I typically make the girls (and by girls, I mean everyone) get what they need. You know to teach independence and all that.

I made it to the cat-infested pee glaze without any interference, and let me tell you, I did not move from my spot. I guarded the cat pee infested glaze as if I was guarding my life.

As soon as the in-laws left, I poured the cat pee infested glaze down the drain.

Joe and Vinnie look at me.

“What are you doing? I was going to dip my ham in that!”

This batch was missing something….

(and by “something” I mean acceptable for human consumption.) 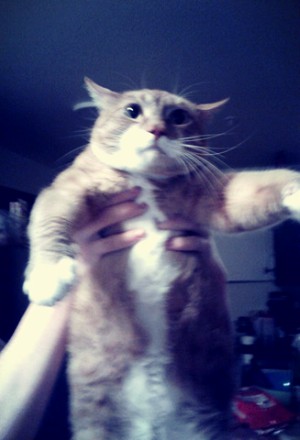