As soon as I saw Christin outside of the diner, I knew what she was doing. Christin’s phone was in her hand, and  she had a text message ready to go to Freddie. I have the luxury of her not seeing me, and because I am such an awesome friend, I figured I can do this one of two ways. I can keep my distance and let her do this whole text message thing on her own, or I can run up and scare the shit out of her, to distract her from sending the message. Although the latter would be funny, I decided to light up a quick smoke and just wait it out before we finish the next leg of out trip. Or…maybe not.

“Jesus Christ Jen, You scared the shit out of me!”

“Yeah, that’s what I was going for……whatcha doing there with your phone?”

Christin did not take the bait.

“Just get your things, we have a five-hour drive ahead of us.”

“This just keeps getting better and better.”

We were off. Five hours of highway ahead of us. Oh fun! That’s me being sarcastic, in case you missed it.

One would think five hours on the open road, your best friend by your side, a perfect playlist securely in your purse, would be the ideal mini vacation. See, I do not work like that. I need a plan. I need a time line. I need to know what the objective is. I need to know when we get to stop for food, and I need to be able to pick out the places we stop for said food. Adapting to Christin’s “The world is our oyster” belief takes some getting used to. Just as my spread sheets and timeframe took her some getting used to.

Four and a half hours later we are still in Oregon somewhere. All I knew is we were heading to some beach town to find a Motel 6 type of spot for our resting place. This is my first time outside of my busy yet comfortable suburb of Seattle. I know I am here for Christin, yet, there is something in this for me. I need a break. I need to recompose. I just need time away. I need to learn to relinquish my control.

In between our conversation of life,  goals, sex, and lack there of, Christin informed me that we needed gas pretty soon or else we would be pushing her jeep to this little beach town that she was adamant we reach.

“Good, I need a coffee, or vodka, so depending on where this gas station is, pick your poison!”

I put my notebook away and took my wallet out. The cool Oregon saltwater air welcomed us to….well…..to some rundown shady looking gas station called “Earl’s” Seriously, only two gas pumps? I had the feeling that in about eight minutes Christin and I would turn into some horribly bad Lifetime Movie of the Week plot. Whatever, I needed to stretch my legs, and smoke.

Christin was already at the pump before I could protest that I did not want to go into “Earl’s” by myself. I was fighting a loosing battle, and in a few minutes, I had a feeling I would be fighting with Earl himself. There was no freaking coffee!

I met Christin back at the jeep, lit up a much-needed smoke, while she gave me “the look” that told me I should probably step back from the jeep as she is pumping gas.

Both of us took in our surroundings. Both of us noticed a run down motel just across the street.

“Oh God no, Christin, no, not here. This is right out of The Hills Have Eyes.”

“But did you see the bar, there is a bar next to the hotel….come on, just for one night. Tomorrow we will be in San Jose.”

Well. Christin may be on to something. I mean if there is a bar, then the lack of coffee at “Earl’s” does not matter, I can get my vodka on!

I was already halfway back in the jeep. What does she want me to look at now. A graveyard? A thrift store? There was no telling with……”No, do not even think about it….no no no!”

There it was. Across the way, another shady run down house, with half of a white picket fence around it.  There was a “Free Psychic Reading by Gypsy” sign hanging on the window. And…let the record show that the sign looked to be written by a child.

It’s official. I am now in hell. Christin and I had two different beliefs on psychics, mediums, whatever the PC word of choice is. She believed in them, I thought they were a crock of shit. Yet, I knew, there was no way I was going to get out of this one.

“Can we at least go to our final resting place before you drag to me Gypsy’s? It will give me a chance to call my family and tell them my last good-byes.” 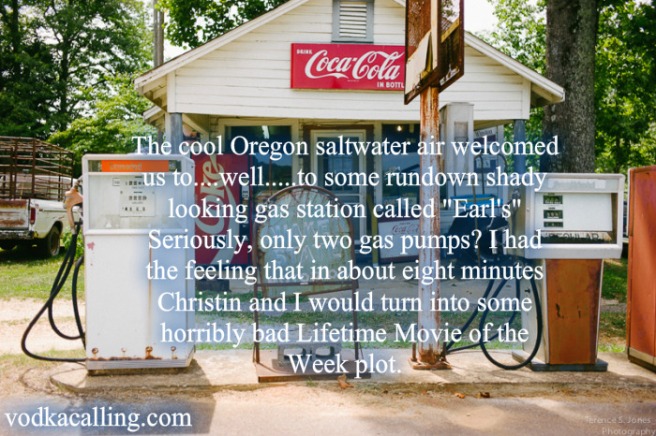 One thought on “Goodbye Earl : The Vodka Calling Road Trip”