2001 was a year of big changes for me. I moved back to Washington State from California in May 2001.  In July 2001 I turned 21. I could finally drink and go to clubs. Not too important in the scheme of things, but at the time it was a huge milestone. I was surprised with some new roommates in August of 2001, Jen being one of them. I didn’t think this would be very important at the time but here we are 15 years later revealing our life stories on this blog and collaborating on some other things.

And yet, September 11th stands out amongst everything else that happened that year. It started out as a very ordinary day.

I hit snooze for the 5th time. It was 6:30am and I had to be to work by 7am. Reluctantly, I got up, threw some clothes on, and grabbed my blue Wal-Mart vest with the cheesy smiley face on the back. Everyone was still asleep as usual. Alphonso and Jen had worked the late shift the previous night, so as expected, they were passed out. I grabbed my purse and keys, shut the door behind me and made my way down to the parking garage. Luckily, the store was only 5 minutes away. Just enough time to clock in right at 7am. The work day began as any other. Starting with putting away the “return carts” in my department. Zone the department and scan all out-of-stocks were next on the list. Somewhere in the middle of zoning (organizing) my infants department, the boy’s apparel department manager came by to chat. Val and I talked about an upcoming clearance sale for our departments. Right above our department sat 2 TV’s hanging from the ceiling. They usually played an endless string of Wal-Mart commercials and promotions. Val and I were in the middle of the conversation when we looked up. The TV’s were no longer playing the monotonous commercials. What kind of movie was this?

Somewhere in the midst of watching a building explode and listening to a confusing monologue about an attack, both Val and I realized it was real. This was happening in real time. A moment later, I took note of my surroundings. The store, which is usually busy with screaming kids and chatter was so quiet, you could have heard a pin drop. Eerily silent. It was 8:57am. I remember looking at time on the T.V. A group of employees joined us in watching. Shock, confusion and worry kept everyone quiet and attentive to the news broadcast. There was not much new information being shown just a repeat of the attacks on the twin towers and talk of other possible attacks. An announcement over the intercom urged all the department managers to the back. All 30 of us crammed into the lunchroom. Everyone sat silently while the Store manager informed everyone on what was going on.  There was a terrorist attack in New York and  possibly another attack aimed at the Pentagon. Some of my fellow managers were visibly upset and shaking. Later, I found out they had family members and/or friends that lived in the area of the attacks. We were told by the store manager that they might send us all home and close the store. They were waiting on the corporate office to make the call if that was going to happen or not. Until then, we were to continue the day as usual and we would be kept up to date on further news.

After the impromptu meeting, I went to the fitting room. I had to let Jen and Alphonso know what was going on. I called the apartment. Ring, ring, ring, ring. No answer. They were probably still sleeping. I tried again.

“Jen..There’s planes falling out of the sky!”

“What are you talking about, Christin?”

I repeated myself. A few times I think. I couldn’t quite get her to understand what I was saying so I resorted to telling her to turn the news on. The conversation ended and I got back to work.

Except it really wasn’t back to work. In between watching the news on T.V. and getting updates from other co-workers, there wasn’t much work that got done that day. The store stayed empty for the entire day. People weren’t out shopping for shampoo or a pair of jeans on this day. They were at home, watching the horror of the attacks on not only the people of New York but the country. Our Country.

It was an attack on innocent men, women and children. A day that people will never forget.  Never forget.

By the end of the work day, I had seen the twin towers explode hundreds of times. I rushed home and flipped on the T.V. Images of people running for their lives flashed on the screen. People crying, people bloody, people in crisis.

I was too young to really comprehend everything at the time. However, over the years, I have heard the stories of strangers saving strangers and firefighters running into the rubble to come to the aid of those in need. All is not in vain. The hundreds of stories of heroism and courage on this day outshines the story of what those terrorist did on that September day. 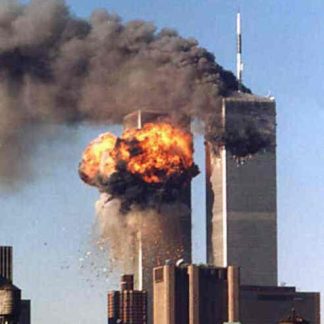 “What do you mean there are planes falling out of the sky?!” I had no idea what Christin was talking about. My lack of sleep did not help. Christin was hysterical on the phone.  Was this one of her weird jokes? She always gave Alphonso and I a hard time for sleeping in. We worked the late shift, sometimes not getting home until 1 am!

Alphonso and I laid there on our respective “beds” for about three minutes in silence. We both had the same thoughts. “Well,maybe we should turn on the news, I am sure it’s nothing?” I made my way to the t.v.  Alphonso reluctantly got up to start the coffee.

It was a matter of seconds before we realized this was no joke. Christin was right. Everything after that happened so fast. Alphonso and I are glued to the t.v. Not wanting to miss a thing. Both of us had family in New York. My grandfathers kitchen window offered a spectacular view of the World Trade Center. Is this really happening? Are we really under attack? Neither Alphonso nor myself had a cell phone. We had a land line. Alphonso and I  took turns calling work, calling our family, making sure everyone was as safe as they can be, while the other was watching the coverage.

I remember I called my dad. I was worried for him. Although he was no longer living in New York, his dad, my grandfather was. The conversation between dad and I was so sporadic. Nothing made sense, how could it? I asked dad if Grandpa was okay, if he had talked to him. In between my dad’s sadness and anger he told me that my grandfather saw the attack happening from his window, “Those Bastards, those Bastards attacked my city.”

Alphonso and I did not say much. We went through our routine of getting ready for work, and made the five-minute drive. The store was empty. The Wal-Mart t.v’s has non stop coverage. We had associates and store managers watching along with the very few customers and a homeless guy. I felt so helpless. Why am I even here? The USA is under attack and I am here.

It was not until later that evening, when Alphonso, Christin and I were sitting in front of our tiny 19 inch t.v watching the continuous coverage. We all knew, all three of us knew, that we would never forget, we would never forget where we were, what we were doing, or how we felt, when the world stopped turning.

“This is a photo I took an eternity ago. It was taken from the kitchen window of my parents apartment in New York. It’s where my brother and I spent much of our childhood. Seeing those gorgeous towers every morning as we started off to school…. Seeing them beautifully lit up at night before bed……..
Then one horrendous day, they were gone. God forgive me, but there is still hate in my heart.
I will never forget.” 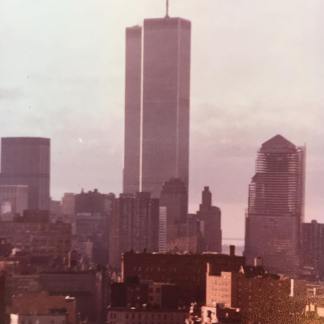 One thought on “Where were you when the world stopped turning?”