I have a disclaimer for those that are extremely conservative: don’t read. (Mrs.Gressman, that would be you)

For those of you that are a little more liberal, you will understand…

Let me set up the situation. I am walking into Wal-Mart with Jason (my significant other) and there are two tables with clip boards. I must add that I NEVER sign anything that people in front of stores are wanting me to sign. NEVER.

“Hi, would you be interested in signing an initiative to get on the ballot…this would help women and children”

That stopped me dead in my tracks. Why wouldn’t I want to help women and children? My first thoughts were: stronger laws against those that abuse children and places to help women after leaving domestic violence relationships. ALL GOOD STUFF, RIGHT?

About the time I grabbed a clipboard to put my information down, an older gentleman in an army uniform comes over to me. Clearly, he’s working for the cause as well. He looks over at me and says “Thank-you for signing. We have to protect the children from the perverts.”

I look over at Jason and he’s signing. I smiled inside because he NEVER signs these things either. He’s a conservative and doesn’t usually fall for this type of “bleeding heart horse shit.” (His words, not mine)

So, there we were, finally agreeing on something. Making a change for those that have no voice. Women and children were going to be saved because we signed this form.

“Thank-you for signing and here is a pamphlet to give you more information.”

I grabbed the pamphlet and began reading, the smile on my face slowly melted away.

I stopped dead in my tracks, again.

“This is an initiative that will not allow transgendered individuals to use the bathroom in which they choose…….”

Do I go back and cross my name off the list??? I look over at Jason and he has a big smile on his face. SHIT. I wadded up the pamphlet and threw it in the cart. I did not go back and scribble my name off the list. Instead, I kept walking, feeling that I had betrayed all the people that deserve to use any damn bathroom they want. I betrayed MY people. You see, I am included in the LGBTQ and therefore, my signature will be used against me.

Lesson learned: NEVER SIGN SOMETHING YOU DON’T READ FIRST!
My very conservative boyfriend thought this was funny as did Jen. I bet he won’t be laughing when he barrels up the driveway this evening as sees my big colorful PRIDE FLAG flapping in the wind in front of our house for all to see, will he?
AND

I will be “liking” everyone’s status on Facebook with the pride flag emoticon. 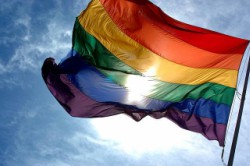 One thought on “Redemption”