I was in 7th grade at Franklin Middle School. So far, I had really good experiences throughout my years at school. I had one kid, Jessie that tried to bully me in 6th grade. But I learned early on if you ignore someone that wants to get a rise out of you, eventually they stop trying. It worked. He only tried it a few times—you know, name calling and intimidation—when I didn’t react and ignored the idiot—he found a new victim.

7th grade was going good so far. I had a close group of friends and played every sport I could. Basketball and softball were my favorites. I had friends of all different races and backgrounds. Some played sports like me and some were into playing instrument. I had friends that were in gangs and I had friends that went to church every Sunday. You could say I had a quite the diverse combination of friendships. But for me it didn’t matter where they came from or what they were into. I always saw the best in people even when from the outside looking in there wasn’t much to see. And if you have been reading the blog—you will know that this is not always a good trait to have. God knows, I’ve seen a sliver of good in someone that is surrounded by mostly bad. Flaw or attribute—the jury is still out on that one.

About half-way through 7th grade a new girl joined the school. Her name was Kim and I had a few classes with her. She was a very quiet, shy, awkward girl. Who am I kidding, didn’t we all look awkward in our younger years? She just didn’t hide it as good like the rest of us. She always looked at her feet when she walked. About a week after she started, I noticed her in the cafeteria eating all by herself. My friends and I were eating at our normal table talking about who was going to the dance on Friday night. I wasn’t sure if I should walk over and have her join our group. I hesitated and decided to wait until I had a chance to talk to her one-on-one. Later that day, after our last class I saw her standing at her locker. I walked over and said the first thing that came to my mind. “Hey, are you going to the dance on Friday?” She looked up and gave me a puzzled look. “I didn’t know there was one” “Yeah it’s 5-8pm on Friday in the gym. You want to come with me and a few friends?” “Umm…I have to ask my mom. But, yeah I want to go”

It turned out that we only lived 2 blocks away from each other. From this day forward, Kim and I walked to and from school every day. She became one of my best friends throughout middle school. We ended up going to different high schools but we kept in touch. I ran into her at Wal-Mart (go figure) in 1998. She just had a baby. We talked for a few minutes and exchanged numbers. Shortly after, I moved to California and lost touch. I’m not sure what ever happened to her but I am glad I talked to her that day in 1993. Some of my favorite middle school memories had her in it.

Jen had invited me over for a dinner. I thought it was just going to be her and me catching up, but it really was her and I, in addition to Alphonso, Jessica, Sean and Jasmine. I had heard from Jen that Jessica and Sean had broken up. I didn’t know the details but was kind of surprised they were hanging out together. I personally didn’t make it a point to hang out with my exes but to each his own.

Jen had attempted to make hot wings but unfortunately, she left them in the oven too long thanks to her make-up and hair. So, instead she ordered pizza. Pizza and vodka for everyone except me– I stuck with pizza and water. It was obvious Jessica really didn’t want to be here. I mean she lived here but you could feel the tension between her and Sean. I had never hung out with Sean outside of work. From what I saw, he always had a smile on his face and was so friendly. Sean and Karl were friends and I could see why—both of them were so charismatic. However, I’m sure Sean didn’t make it a habit to hit on other women while he had a girlfriend.

The evening started off good. Jen put her Motley Crue Cd on. Jasmine was following Jen around like her shadow. Interesting observation. I thought she had a girlfriend?? At least that’s what I heard. Jasmine was allegedly dating Joanne, an assistant manager. But from what I was seeing Jasmine might have a thing for Jen. Or maybe my pregnancy hormones were making me delusional. Alphonso was mixing drinks in the kitchen with Sean. They were debating the right way to make a Fuzzy Navel.

I needed some fresh air. I stepped out on the back patio and there was Jessica. She was just finishing up a cigarette. “When is your baby due?” “March 17” I replied. “That’s a few days before my son’s birthday” she said. Up until this point Jessica and I hadn’t really talked outside of work. I could tell she was going through some things. She had bags under her eyes and looked like she hadn’t slept in days. I didn’t want to pry but I wanted to let her know if she needed to talk, I was a good listener. Turns out, I didn’t have to pry. She started telling me about the problems between her and Sean which lead them to break-up. According to her, Sean was friendly to everyone, especially other women causing her to believe he was cheating on her. I sympathized with her and revealed some of my own similar past situations. I left out the whole Karl thing because Jessica and Karl’s girlfriend were friends. Jessica said that she never had any concrete evidence but deep down she just knew Sean was stepping out on her. I felt bad for her. I gave her the good old “You can do better than him” and “You don’t need a man” speech. It seemed to lift her mood a little bit. We were talking for what seemed like forever when at the same time we realized the apartment was dark and quiet. We both walked in and the apartment was deserted. Nobody in sight.

Where the hell did everyone go? Jen’s boys were still playing in the room. Vinnie was watching cartoons and A.J. was building a castle with his new Legos. Everything was good in here. She suggested we grab some pizza and head back outside. It was an abnormally warm evening for November, so I obliged. We sat outside talking about how shitty men were. It was a good therapy session for both of us. I found out she was a single mom and her son’s father had left before he was born. Apparently, we had more in common that either of us had realized. After what seemed like forever we heard a commotion in the apartment. Lights came on and I could hear the music blasting. They were back. Jessica and I went inside. “Where did you guys go?” I could tell Jasmine had a few too many too drink. “We had to go to 3 different liquor stores to get what we needed” Jen said while making her special alcoholic concoction for Jasmine. Thank God Jen and Sean were still sober. I didn’t want to be the only sober one hanging out with a bunch of drunk fools.

Jessica decided it was time for her to retire to her room. She thanked me for the chat and we exchanged numbers. She said she might need more “therapy chats”. The truth was I probably needed just as many if not more “therapy chats” than she did. Jasmine and Jen were in the dining room teaching A.J. and Vinnie some kind of card game. Actually Vinnie was trying to rip the cards up. Typical 2 year old stuff. Alphonso went back up to his apartment to get some sketches of dresses he wanted to show Jen. Not interested. I was getting ready to leave as Sean was trying to find a football game on T.V. I thought I would stick around and watch a few minutes of game. “You like football?” Sean asked with a smirk on his face. “As a matter of fact—I do” I spouted back. This led to a friendly dispute on what was wrong with the Seahawks offense and defense. After we came to the conclusion that Matt Hasselbeck needed to be replaced and soon, the conversation took a turn for the unexpected.

He began telling me the problems between him and Jessica. He told me she wasn’t allowing him to talk to people because she thought he was cheating. According to him, it was her insecurities that got in the way of their relationship. She was suspicious of everyone, even Jen. I’m not good at reading people when it comes to my own life but when it comes to others, I can read between the lines with great accuracy. My conclusion after talking with Sean for 2 hours was that he was being honest and genuine. He still cared for Jessica after everything but because of her past relationships, she was unable let go of it all.

I really needed to get home. It was late and I still had a 45 minute drive back to Lakewood. Shawn offered to walk me out stating “a pregnant lady shouldn’t be walking down to the parking garage by herself”. I was thankful for that. Pregnant or not that parking garage was scary. He walked me down and made sure I was in the car safely. On the drive home, I was thinking about how one conversation with a person can ignite a friendship or maybe just make you feel like you are not so alone. Like back in 7th grade.

I made it back to my apartment about 1am. I was exhausted. I was brushing my teeth when I notice my answering machine light blinking. I pressed the play button. “It’s Jen…call me as soon you get home!” 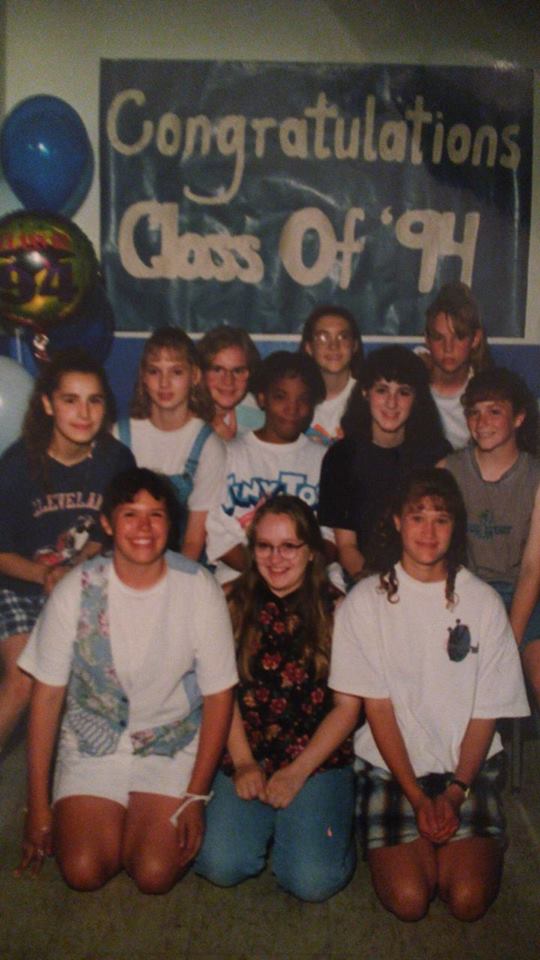